From lane changes to full braking

Investigations of vehicle dynamics play a critical role in vehicle development at Daimler AG. The tests are planned well in advance and pose a challenge for the engineers every time.

The look of extreme concentration on Andreas Pfister’s face changes into a satisfied smile. The checklist in his hand is long, but there is a check mark after every item. All the boxes are packed and ready. A heavy semitrailer is already waiting outside to pick up the material and the two test vehicles that are disguised beyond all recognition. The destination: the IDIADA proving ground, 70 kilometers west of Barcelona, one of the most modern proving grounds in Europe. This is where the vehicle dynamics of the prototypes will be studied in great detail.
Here, from his desk in Sindelfingen, the Daimler engineer and his colleagues have planned everything in detail: from the selection of the vehicles and the installation of special data acquisition to booking of the proving ground, flight and hotel. The prototypes are in a “test-worthy” condition, meaning that all installed components have the right version. The test plan with the maneuvers to be carried out is also already finished and saved on the laptop: “We worked with measX to develop software that optimally assists us in the preparation and performance of vehicle dynamics testing,” explains Andreas Pfister. Nevertheless, he still has two strenuous weeks ahead of him. He won’t have much opportunity to see any of Barcelona or the surrounding countryside of Catalonia. 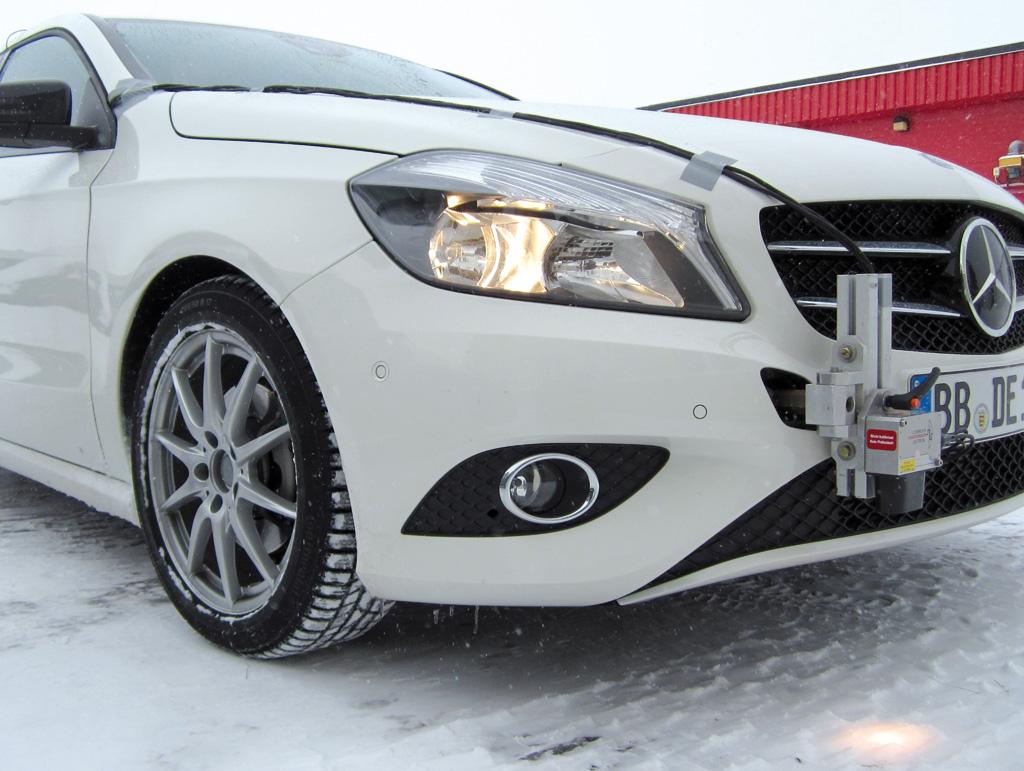 Three days later, Monday at 11 am. Five masked cars are making their laps on the large vehicle dynamics track. Still feeling the early 5:50 am flight, the Daimler employees are discussing what they have planned for this first day of testing. The vehicles have been conditioned and fueled up, and their current axle loads have been measured. The required warning signs are affixed to the rear. The laptop with the MOSES software is mounted to a measurement frame on the passenger side, and another display is mounted to the windshield in a visible location. If the driver deviates from the target values during a maneuver, this will be indicated here in addition to an audible signal. According to the 53-year-old Andreas Pfister, MOSES has significantly improved the factor of safety: “The entire measurement is prepared while stopped and activated by corresponding triggers just when the maneuver starts. You can concentrate entirely on the driving.”

On the first track section, one measurement series is carried out after the other. The disguised prototype passes repeatedly through the line of cones, this time at a wider distance, the next time closer. Countless curves, evasive maneuvers and braking maneuvers are performed. In between, the vehicle is modified and the maneuvers repeated with a changed undercarriage or different tires. “We used to perform the exact same measurement ten times in some cases to ensure reliable results. Now the software gives us direct feedback. If informative values have been obtained already after five attempts, we can move on to the next task,” explains Andreas Pfister over a midday cup of coffee. But he won’t be taking a long siesta today. The time pressure is simply too great. The day after tomorrow, the first results must be discussed with the colleagues in Sindelfingen over the phone or in a video conference. In the end, over 680 measurements will be taken in 7 maneuvers to serve as the basis for far-reaching decisions.

In addition to the testing of fundamental aspects, the engineers also explore the limits of the vehicle, such as with regard to tilt stability. “We would like to know how a fully loaded vehicle responds in extreme situations. For example whether the vehicle remains on all four wheels during a double lane change through the cone lane even at 80 or whether it starts to skid while braking on a curve,” says the vehicle dynamics expert. The trick is to always vary the maneuver just slightly to find out when the critical point is reached.

On a typical testing day, the test engineers spend up to eight hours behind the wheel. And they must concentrate on a great many things at the same time in order to perform the maneuver properly and not get in the way of the other vehicles. Maneuvers with steering robots are particularly complex, requiring the driver to initiate a special steering pattern at a specific time. With many steering robots, it is also necessary to wear a helmet because the usual airbag function is no longer present.

Evasive maneuver tests are especially strenuous physically because the driver must brace against the seat with full strength while steering hard back and forth. “The lateral accelerations can be almost one g. Not only do you hear the tires squeal, you also feel it pretty well,” says the engineer raised in Wiesbaden, who has worked in vehicle dynamics measurement at Daimler for over 25 years.
He is away from home for almost 100 days out of the year. In northern Germany during the summer at the company’s own test track in Papenburg and in Spain during the wet, cold season. Plus, there is also the winter testing in Lapland. “At minus 20 degrees Celsius, you only leave the heated vehicle when you absolutely have to,” he jokes. After two weeks, he is always happy to be back home. Nevertheless, this is his dream job: “It is great to be so closely involved in the vehicle creation process. Overcoming all the challenges in this process, that never ceases to be interesting.”