Automation of a climate chamber

The times in which the engine water cooler had to live a “single life” in the vehicle are long since past. Additional, separate cooling systems are now increasingly employed for the charge air, the motor oil, the transmission oil and the fuel.
For such coolers, the company Imtech has established a cooler test bench at Audi for which measX created the entire measurement, automation and analysis software.

The cooler test bench serves for determining the thermodynamic properties of automobile coolers, peripheral coolers such as oil, charge air and fuel filters, measurements on cooler fans and simulation of the operation of air-conditioning condensers under reproducible conditions. 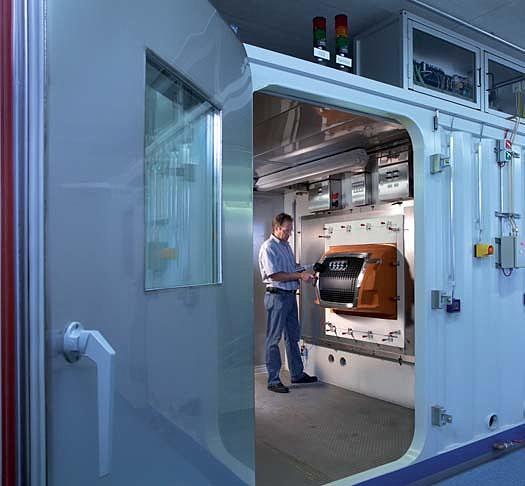 Design of the cooler test bench

The test bench is built as a two-chamber system with a closed air circuit and consists of an intake and a discharge chamber. These two chambers are separated by a permanently installed, pressure-tight wall into which the various test samples are installed. In addition to the chambers, test bench also includes the corresponding conditioning modules for the secondary-side temperature adjustment of the test samples.

The following basic tests are carried out:

In addition to the development of software for the monitoring, automation and evaluation, measX also delivered the measurement hardware.
The data collection and the conditioning of the test sample measurement values is realized via CAN modules and Compact FieldPoint modules from National Instruments. All measurement modules, including their power supplies and various power supplies for the sensors, are located in a cabinet on the top of the climate chamber. The cabinet, which was equipped with windowed doors at the customer’s request, was manufactured from Item profiles, allowing it to be precisely adapted to the available space conditions. All sensors required for a measurement can be connected to two patch panels mounted inside the climate chamber. The designs and pin assignments of the connection sockets in the patch panels were coordinated with the users in advance so that no additional adapters or sensor power supplies were required. 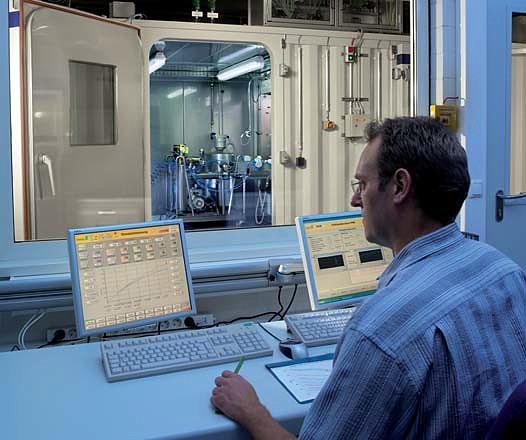 Automation technology as a complete package

Imtech Siemens-S7 controls were used as the control and regulation units. measX designed and developed the measurement and automation software in close cooperation with Imtech and Audi. The entire work of the automation system was distributed among two computers.

The test bench computer serves as the central operating and display component. The software was realized based on LabVIEW and contains a number of different operating and visualization pages for general control of the test bench. In parallel with the test bench computer, a separate measurement computer takes over various tasks that are integrated into a DIAdem application. The image shows the display interface for the basic documentation and measurement functions.

During preparation of a test, the user is guided through various screens in order to enter the various parameters of the test sample and the measurement task. This data can also be saved and reloaded as a configuration basis for new tests. The software checks various parameters for formal input errors. 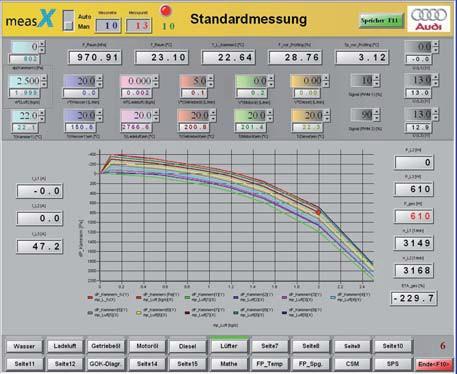 During a test procedure, the system runs through various progressions, passing through a number of operating points for each one. After completion of the test, all measurement data, including the descriptive test data, is saved in a DIAdem file. Afterwards, the test data can be exported fully automatically to an Excel form, if desired, and supplied to the test bench customers as complete documentation of the test including charts and graphs. The measurement computer has an archiving function for long-term archiving of the tests that stores the measurement data, descriptive data and the Excel test documentation in an Audi-internal archiving system.

The operators of the climate chamber are skilled in DIAdem and can make their own alterations with regard to the measurement tasks and the type and format of the online display. Naturally, they also have access to our support personnel in an emergency.