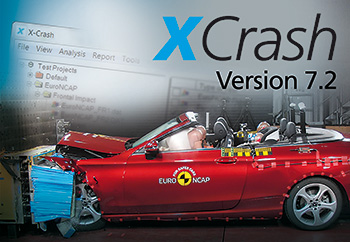 (Moenchengladbach, 26 March 2020) The use of precise analysis software is essential for crash test evaluations and the optimization of vehicle safety. The worldwide established system X-Crash of measX GmbH & Co. KG from Moenchengladbach, Germany, has been used for more than two decades for reliable test analyses in the automotive industry. Under the aspect of continuous development X-Crash was released in mid-2019 in its 7th version. Since March 2020 the update 7.2 supplements the previous functional standard of X-Crash with important updates as well as completely new analyses.

The first X-Crash version appeared in the mid-1990s. Advances in vehicle safety mean more and more new tasks in the evaluation of crash test data. As a result, different testing institutions regularly redefine or update standards. These standards make a significant contribution to the continuous improvement of vehicle safety and make a complete further development of corresponding software indispensable. As an internationally recognized standard software for the analysis of tests for passive vehicle safety, timeliness and flexibility are important features of X-Crash. It is also used as reference software for all Euro NCAP star ratings, among others.

The latest update, X-Crash Version 7.2, is now available for existing customers. They had already expected the release from measX in February, but unforeseen adjustments required a postponement. The main features of the updated version are 21 newly included evaluations, including those for Euro NCAP 2020, ANCAP 2020 and Korean NCAP. In addition, 21 further, already integrated evaluations have been updated. Furthermore the measX developers are currently carrying out extensive adaptations in the area of the data interface, which are expected to become available with the release of version 7.3 in June 2020. These same adjustments are responsible for the current update delay as well as a temporary deactivation of the MME2 write, which will be removed with the release of version 7.3.

"With the establishment of X-Crash as an international standard as well as a reference in Euro NCAP, we have taken on great responsibility. We regard the release delay and temporary MME2 restriction as justifiable. Otherwise, urgently needed analyses would have become available even later", Sebastian Rings, Head of Development at X-Crash Software, explains the decision. His development team also took advantage of the delay until the actual release to make some crucial additional fine-tuning.

The X-Crash program is based on the established software DIAdem from National Instruments. It was developed by the test data analysis experts at measX specifically for the requirements of safety analyses in the automotive industry. While the central X-Crash software is specialised in the analysis of passive vehicle safety, the program family with X-Crash Zero also offers a corresponding solution for active vehicle safety as well as additional tools for Head Injury Risk (Advanced HIC) and Dummy Certification (ATD).