How it all began: “Registered under commercial register number 2568 in Mönchengladbach: DATALOG Systeme zur Messwerterfassung GmbH. The purpose of the company is the sale of systems for data acquisition and the provision of services.”

At the time, our hardware portfolio included exclusive distribution in Germany of the “data logger” products from MS (Mess- & Systemtechnik) in Munich, from CIL England and Adcomp, also in Munich. The computer platforms at the time were the Commodore PET and CBM computers as well as the HP series 98xx. 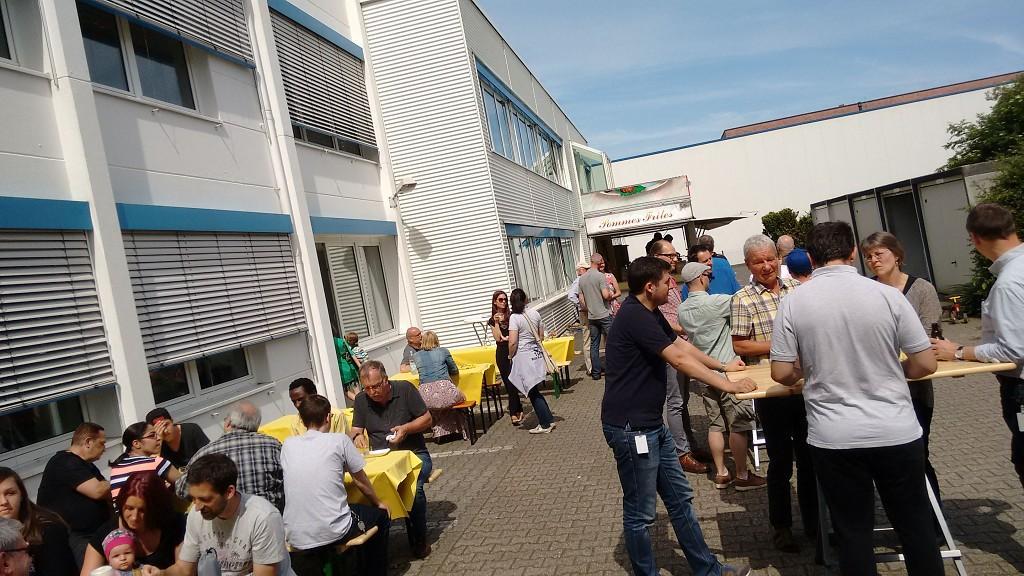 The weather was perfect during the celebrations in the courtyard.Even in the year 1983, with the introduction of the IBM PC, we developed software for scientific and technical applications on what some called these “exotic computers”. We took over exclusive sales of the “DAP cards” of the US manufacturer Microstar in Seattle.
With these intelligent cards – they had their own processor on-board – it was possible already in 1984 to calculate an FFT analysis over 1024 points in < 2 ms on a PC, for example. This was a sensation at the time, which enabled us to sell several thousand of these products in Germany alone. With the general adoption of the PC for technical and scientific use as well, we decided at the end of the 80s to develop a program “under Windows” for data acquisition, analysis and evaluation with the name DASYLab. It was a huge success, and we founded a sales company in the USA, created English and Japanese versions and enjoyed worldwide success.
In addition to the development of standard software, we took on more orders for the delivery of complete systems. Starting with the hardware, we moved into performing the necessary signal adaptation and from there to creation of the required customer-specific software. DATALOG had become a full-service provider for data acquisition.
At the end of 1998, we were acquired by the National Instruments Corporation, Texas, USA. One year later, NI also purchased GfS (Gesellschaft für Strukturanalyse) GmbH & Co. KG in Aachen. The system units of both companies were merged in 2001 into the new National Instruments Services GmbH & Co. KG, headquartered in Mönchengladbach, formerly DATALOG. The Aachen and Dresden locations were retained.
In 2004, we decided to change our name from National Instruments Services to the current name of measX.
One important reason for this was the discovery that we were serving a different field of business than our parent company. An office was opened in Stuttgart. The last major milestone in the history of the company was when six top managers at measX took over the shares in the business from NI at the end of 2004, and since January 2005, we have offered our services as an independent German company.
As General Manager of measX GmbH & Co. KG, I would like to take this opportunity to thank all of my colleagues for their many years of collaboration, their loyalty and their outstanding dedication every single day.